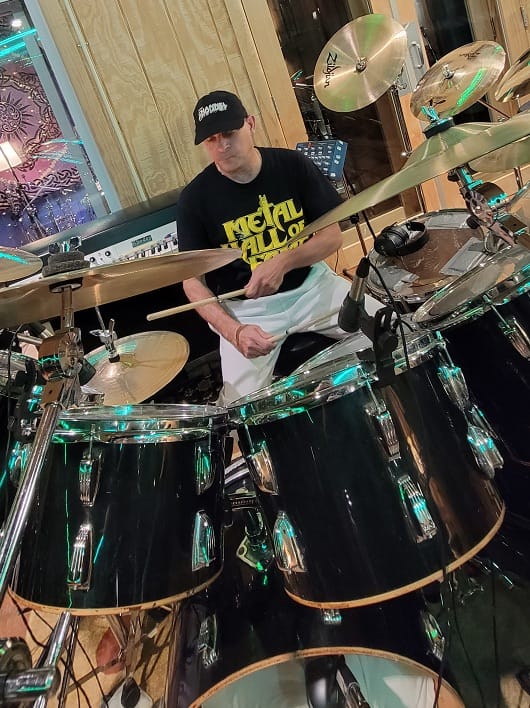 CLIFTON, NJ – Zildjian Artist-studio/touring drummer/D.A.D. (Drums and Disabilities) / Metal Hall of Fame founder Pat Gesualdo is taking part in the “Metal Hall of Fame All-Stars” charity cd project to help bring free music programs for special needs children isolated from the lockdown. The programs will help children suffering from various disabilities to develop retention, coordination, and physical and cognitive abilities. The charity CD features a combination of original and cover songs. It will be released early 2022, and available at metalhalloffameallstars@bandcamp.com. 100% of the proceeds from sales of the CD goes directly to the charity initiative.

A previously recorded track with one of the most Iconic All Star Jams of all time, featuring

“The Metal Hall of Fame All Star Charity Project is a very important cause,” says Pat Gesualdo.”I always make sure to help special needs children and adults as much as I can, and I include the D.A.D. Program (Drums and Disabilities), in all of my lectures, clinics, tours, and Metal Hall of Fame events and I do.” “For me, It’s all about helping the special needs children, adults, and wounded veterans.”

Doctors, psychologists, Special Needs Therapists, and Teachers in over 15 countries use Gesualdo’s pioneering Drum Therapy(R) techniques to help the special needs children and adults to develop physical and cognitive functioning. Additionally, the U.S. Department of State, has brought Gesualdo to various regions of the world to help disabled children, and the United States Department of Defense calls on him to train and certify U.S. Military health professionals. He also wrote the first law in the United States to provide the special needs population with additional protective legislation. Alfred Music Publishing publishes Gesualdo’s groundbreaking book “Drum Therapy, Healing With The Drumset,” which helps drummers and special needs therapists on a Global basis teach special needs drum students. Gesualdo is an artist/clinician with Zildjian Cymbals, Promark Drumsticks and Evans Drumheads, and lectures and performs in drum clinics throughout the world.